During the construction of 1 New York Street a tunnel was visible linking the site with the Royal Bank of Scotland, under Mosley Street. You can see photos of it on Michael Ashton’s Flickr page and warhead’s Flickr page (reproduced below).

Read more in The Art Of Science At City Tower on the Skyliner blog.

The city centre location of the 1 New York Street site presented a number of challenges as there are adjacent tram lines in the road and tunnels underneath the building. 1 New York Street sits on a site which was previously a BT building with tunnels running from George Street to Piccadilly Gardens. To minimise disturbance to both the tram lines and the surrounding area, the existing basement structure has been used in conjunction with new pile foundations. 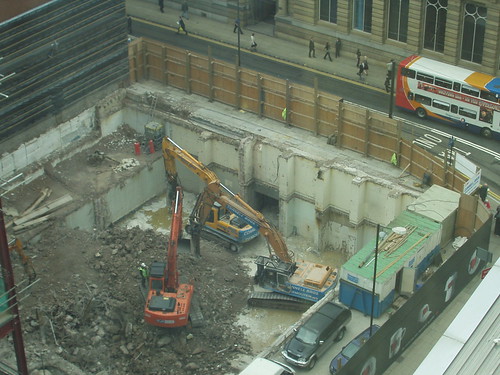