Victoria Arches (also known as Cathedral Steps) is an area with many layers of history. The story goes back to the ancient days of Manchester where the city was little more than a settlement surrounded with water based defences—the Irwell, the Irk and Hanging Ditch. The road’s original level sloped towards a bridge at Hunts Bank over the River Irk and was later levelled out by the creation of a new embankment with a row of arched supports raising the road to a new level between 1833 and 1838.

The original cobbled road continued to exist as a sloping passage which continued down to water level at the Irk, but was bricked up at some point around Fennel Street. These arches were used by commerce in Victorian times and from 1895 were used to access landing stages for boats offering popular trips along the River Irwell to Manchester Docks and Pomona (see postcard showing boats landed).

In 1906 the stages closed and with the advent of WW2 the arches were converted into air raid shelters for 1,619 occupants. After the shelter closed access to the public toilets remained via a staircase near to the cathedral, roughly where the four trees are outside Hanging Ditch Wine Merchants marked by the pin on the map. Other entrances existed via wooden steps from both Victoria Bridge (location shown in the photo below) and Cathedral Approach. You can see plans for the shelter in the Manchester Libraries Archives. A snippet of the plans can be seen on their Flickr stream.

Manchester Libraries Local Image Collection has plenty of photos of the arches, including a photo of the original sloped street, a photo of steps down to landing stages, steps down to an arch and of the old Cromwell Monument with another set of steps down from the middle of Victoria St.

You can see the original entrance to the underground toilets at Victoria Arches in the postcard shown elsewhere on this page.

There are many reported visits by explorers, and some stunning photography from Andrew Brooks. Read more and see photos from inside on Manchester Underground, Cathedral Steps Explore, Ojay’s post (with entrance), a return, an update about Irwell city park and a finale. You also can read details about the Proposed park and artists impression. 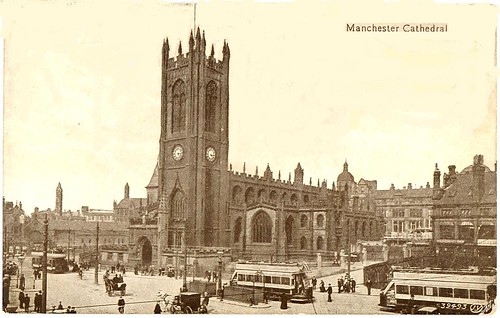